Battle Of Tech Titans For Future Of Health Care

Amazon vs Google Shaping Up To Be Good For Consumers

I‘m continually reading about how the top technology companies will disrupt and shape the future of health care for both industry and consumer benefit. Certainly, technology as a whole has an excellent track record of improving outcomes for both.

If you pay any attention to the news on this front than you know the two biggest players with the most influence on shaping the future of health care are Google and Amazon.

As we’ve outlined in past posts about Google plays in the health care space, and Amazon’s health care strategy, Google is likely best positioned to disrupt based on their assets, acquisitions and reorg/restructure initiatives. But this is a battle of the titans and Amazon, though behind in its execution, has the potential to dominate.

In one corner, we have Google… with significant assets and progress in areas like health data infrastructure and management, artificial intelligence (AI) and disease management through innovative medical equipment, diagnostics and treatments.

In the other corner, Amazon… the new kid on the block, not counting their failed attempt at entering health care in 1999-2000 via Drugstore.com. Combining it’s powerhouse distribution model with forays in pharmacy, medical equipment, AI-driven in home healthcare and diagnostics, Amazon is well situated to flex it’s muscle in the marketplace.

Amazon could use its expertise to disrupt everything from the pharmaceutical supply chain to Medicare management. We break down the healthcare areas best suited for an Amazon entrance.

Amazon is looking to dominate more than just online retail.

The e-commerce behemoth is serious about entering healthcare, bringing with it a non-traditional business model, infrastructure in logistics & computing, and customer love.

Many existing health giants are scrambling to compete, while others are looking for ways to Amazon-proof themselves.

But this isn’t Amazon’s first attempt at transforming the space.

Between 1999-2000, the company began investing money into Drugstore.com with plans to expand its e-commerce business into the pharmacy space. It eventually ran into the existing web of middlemen, regulators, and more, which brought its ambitions to a halt.

Now, Amazon is trying again. Earlier this year, it announced a joint healthcare venture with JPMorgan Chase and Berkshire Hathaway. Before the collaboration, the company acquired online pharmacy PillPack for nearly $1B.

But it’s not the only tech company expanding into healthcare.

Many are advancing in the space by playing to their strengths: Apple’s patient-centric vision prioritizes consumers, while Google continues to apply AI to everything from medical devices to lifestyle management solutions. Microsoft is building health data management on top of its cloud platform Azure.

In ourHealthcare 2025 research briefing, we asked which tech giant would have the biggest impact on healthcare. Even before announcing any concrete plans, Amazon came in second place — just behind Google. 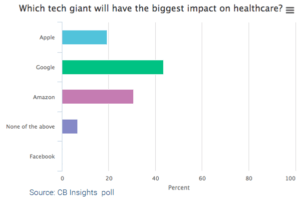 But as the e-commerce giant moves into the healthcare sector, many questions arise:

Using CB Insights data, we dig into how Amazon is pushing into healthcare, focusing on how the company is leveraging its current strategy to move into different areas across the space.

As Amazon enters healthcare for the second time, it brings several new strengths to the table.

Its current scale and reach are larger than ever before. The company has a direct distribution advantage to over 300M active customers, 100M Prime Members, and approximately 5M sellers on the site, which could prove useful should it ever develop health solutions for small businesses.

By teaming up with JPMorgan and Berkshire Hathway, Amazon now has an additional pool of more than 1.2M employees — diverse in socioeconomic status, geography, and age, among other factors — to test its products on before releasing them to the public.

This could be helpful when searching for solutions that work for both specific use cases (e.g. chronic disease management) and population demands (e.g. pharmaceutical delivery). 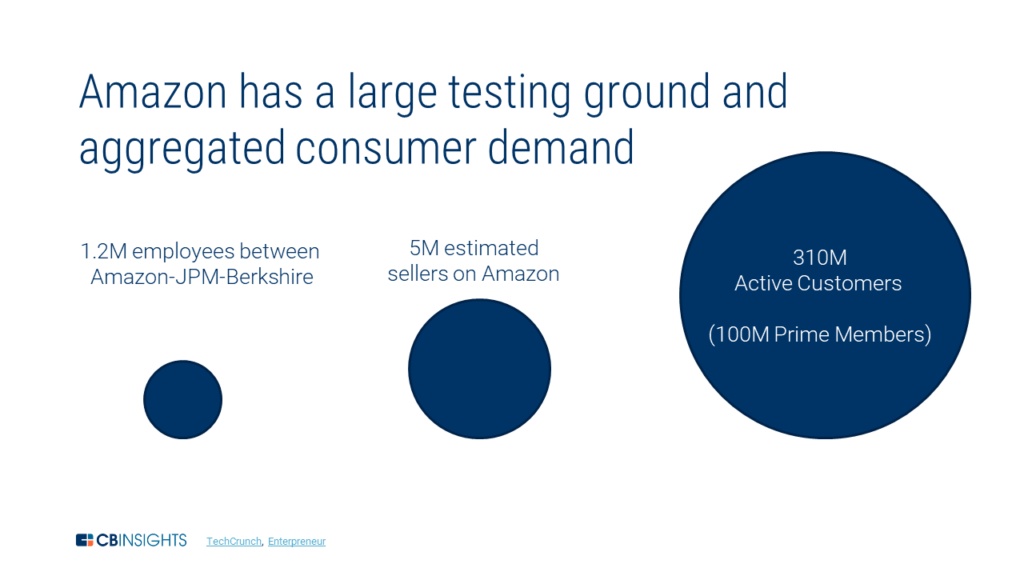 Amazon’s ecosystem has also given it more cash to deploy, which is why it can afford to pursue low-profit initiatives. As stated in the Amazon-JPM-Berkshire partnership announcement, the companies want to build an independent healthcare company “free from profit-making incentives and constraints.”

This is doable for Amazon, which can make money by growing its core businesses like AWS and Prime, and enter into healthcare willing to eschew profit as its other businesses become more valuable.

Existing health giants will find it difficult to compete with a company whose strategy is not dependent on making a profit in healthcare.

But Amazon has used this strategy for decades.

It has reinvested its revenue into massive infrastructure build-outs in the logistics and data center spaces, which will be a significant advantage as it enters healthcare.

Amazon Web Services (AWS), for example, can help handle the enormous data loads and analysis required in the healthcare space.

Amazon’s fulfillment centers, supply chain, and acquisition of Whole Foods has put it within range to distribute healthcare goods and services quickly. 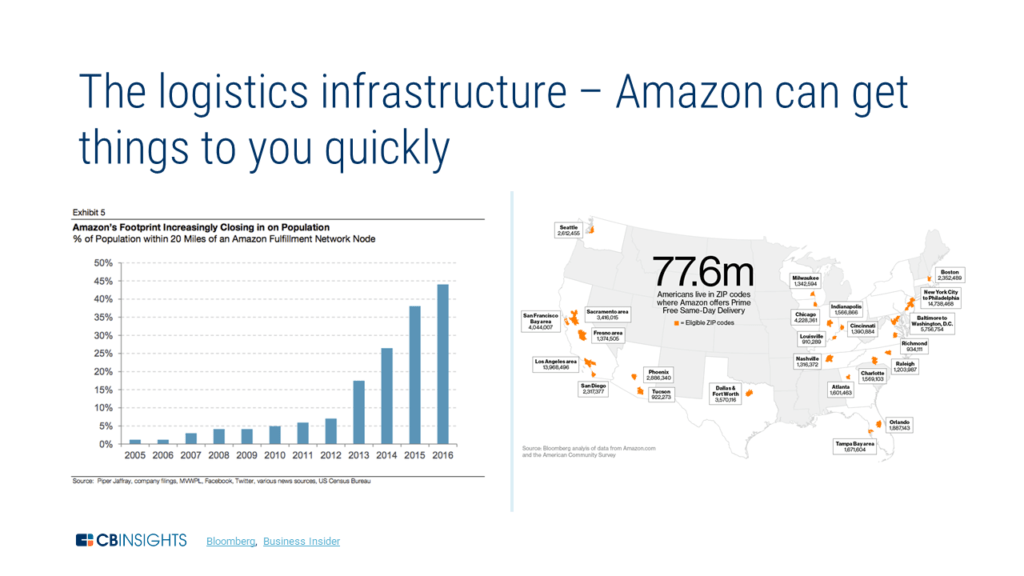 The last critical advantage Amazon brings to the table is its brand.

Customer experience has been an afterthought in almost every part of healthcare, and is reflected in the poor NPS scores (related to customer satisfaction) across the board.

Amazon will likely leverage its obsessive focus on consumer experience to persuade customers to switch to its offerings. The question becomes whether Amazon can bring its consumer-first brand into healthcare faster than existing healthcare companies can improve.

As Amazon enters new spaces, it follows a strategic playbook: 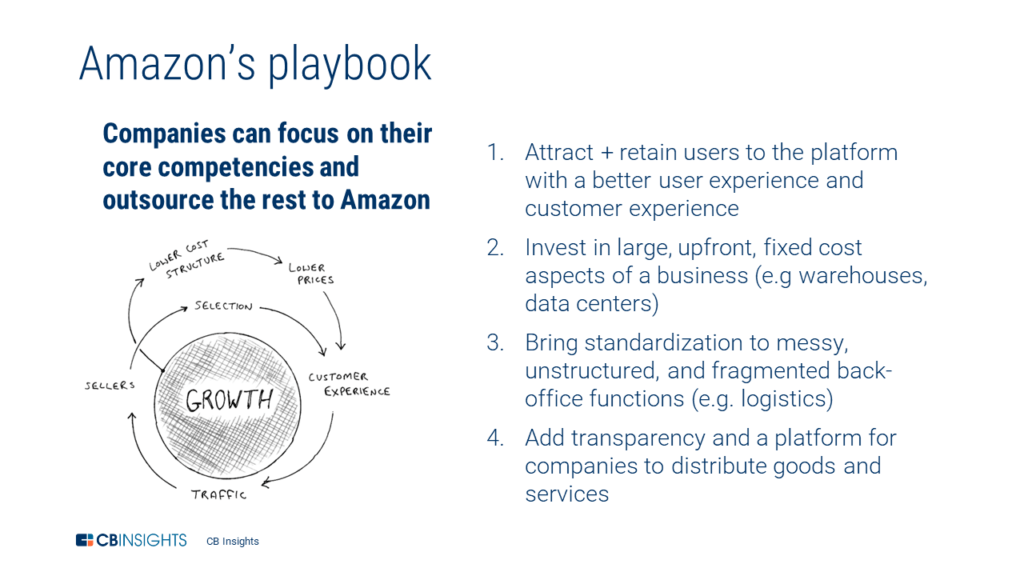 First, Amazon introduces a customer-friendly product with a user experience and customer experience superior to that of its competition. This allows the company to build economies of scale, network effects, and leverage for negotiating with other parties (e.g. suppliers).

Then, it invests in upfront fixed costs that allow it to function better and provide an outsourced version of services to its customers. We’ve seen this with Fulfilled By Amazon (FBA) and Amazon Web Services (AWS), which allow companies to use traditionally expensive services (warehouses, data centers, etc.) on a rent-to-own basis. 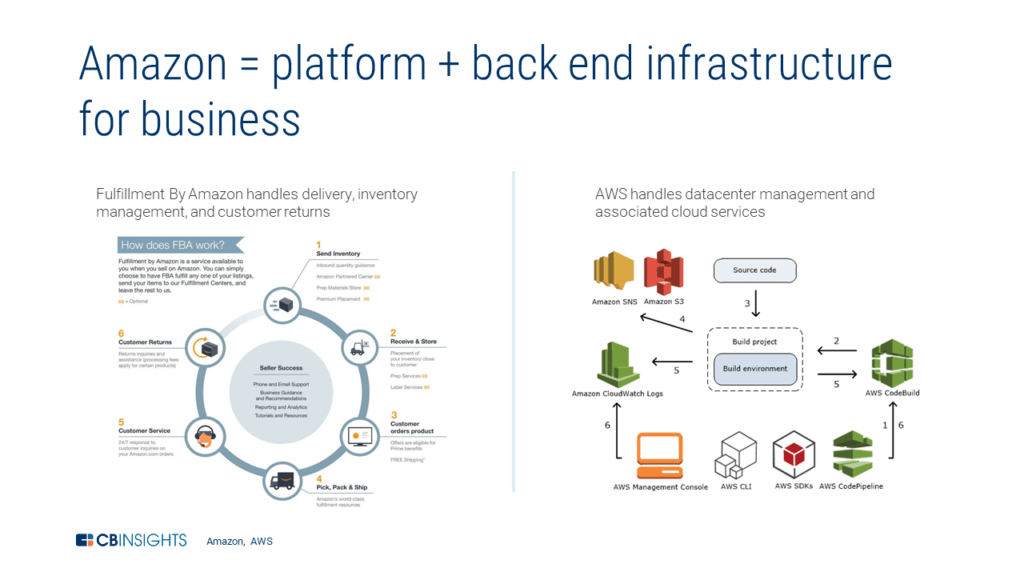 By attracting enough users to a platform and offering its own outsourced services, Amazon can then standardize suppliers’ offerings on its platform. This allows it to create transparent and competitive markets for buyers and suppliers.

Hiring Atul Gawande to lead its joint healthcare venture with JPM and Berkshire suggests a continuation of this playbook.

Gawande is focused on using standardization as a means of scaling up healthcare, especially for relatively commoditized goods and services.

Lack of standardization and focus on consumer experience has resulted in an incredibly fragmented, opaque market in healthcare, which makes the following particularly vulnerable to Amazon’s entrance:

We’ll dive into the healthcare areas that Amazon has the ability to transform using its strengths in the e-commerce space.